my name is sara and i am a slacker

i am a slacker because i haven't touched this blog in over 5 weeks and because this post has been sitting in "the archives" since last december!  lots going on around here but i will touch on that another day...  with this post, i was just too lazy to take the time to put it together...these bad boys took a crazy amount of time and quite honestly after they were hung, i didn't want to think about them again for a really, really long time!
but when i saw this post over at remodelaholic, i realized decided it was way past time to share!
the "bad boys" i am referring to are chandeliers made from electrical conduit, some cable ties,
a clothing pricing gun and the bottoms of water bottles! 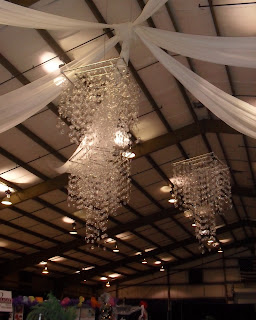 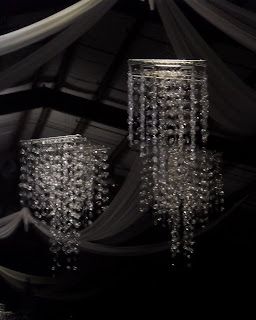 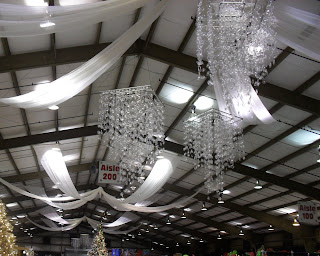 what do you think?!?  would you have dreamed they were made from thousands of water bottles?!?  don't ask where i got all of them...you wouldn't have done it.
last year i was decorations chair for christmas jubilee (the junior league of mobile's holiday shopping market).  we have the market at the fairgrounds and as you can see the main building is a less than gorgeous, metal building which is screaming for decorations!  when the market chair and i met to discuss our plan, we had lots of the same ideas and one was to figure out how to put some draping on the ceiling and make chandeliers!  after looking at tons of pictures online (if only pinterest had been around!) and then several ideas of how to make this work, my brilliant, engineer husband came up with the plan to make the frame from the conduit.  i really wanted plexi so they would appear to "hang from nowhere" but drilling that many holes would have shattered more pieces of plexi than i had in my budget to break and i was very pleased with how the frames turned out.
i doubt you are going to be making anything on this "grand" of a scale as the largest frame is 3.5'x3.5' but i will give you a general idea of how to pull this off.  we had 3 frames set inside one another (see "sketch" below) which were held together with cable ties!  i LOVE cable ties by the way.  the "inner frame" had the longest strands of bottle bottoms, the "middle frame" had the middle length and the "outer frame" had the shortest (again, see the lovely sketch).

to get the plastic "discs", we simply laid water bottles on their side and ran a razor blade around the bottle; about 1/4" from the bottom.  then we took retail pricing guns and shot the barbs through the "top" of one disc and the "bottom" of another and continued like that until we had a strand as long as we needed. like, on the sketch above, it looks like the discs are "floating in space"...imagine that empty space has a pricing barb connecting the two.  i hope i am making sense here...i made these over a year ago and i am a VERY visual person so i am not the best at "worded directions"!

if you find yourself wanting to make some of these...please let me know and i will answer ANY questions you may have.  i fully expect one to make an appearance in my house in the future so when that happens, i'll take better pictures with step by step directions (i was under too big a deadline to worry about that last time!)  there are just so many variations you could pull off and it is a great re use of resources and easy on any budget!

let's look at them one last time...

i hope after this last hiatus, i was able to leave you with some inspiration this afternoon!  but most of all, i hope you are enjoying this blessed Christmas season!  be back soon....

Posted by smcfarland at 2:45 PM