there is too much stuff in here

the "here" i are referring to here is my brain!  did i not just post last week how my brain was remarkably clear...i think so but i don't dare look back and clog my brain further!  so in an effort to purge some things, a little video for your enjoyment!  it is a tiny bit long so only grand parents will probably sit through the entire video but i couldn't resist...jay said we needed one when she didn't know we are filming and she isn't so subdued but how often do i get to film her singing in the car?  not often since i am most often the driver...somehow that seems even more frowned upon than texting and driving so i have refrained.
this is hadley singing "what you call love" from guster's last release, easy wonderful.
she wanted us to start the song over so she could sing so i had to catch it on film; oh thank you iPhone! (though do you seriously only work with quick time!?!  this video is 3 minutes long and i can't compress or really edit down to give you the whole picture but trust me grand parents, we have the entire 3 minutes and you can see it soon!  we don't have quick time on our computer and i find editing on the iPhone to be a pain...)

you could say it is a bit selfish that until a few months ago the only music played in my car was "my music" but they don't complain.  when hadley was little, there was a time that feist calmed her in the car and she calls dave matthews' big whiskey and the groogrux king album "her song" to this day!  and just last week when guster came on the radio, audrey started kicking her feet, smiling and saying "gus her, gus her"!  i think they are perfectly content.
ahhh...guster.  quite possibly my favorite band of all time.  i had not seen this band since 1998 or 1999 at city stages with erin and then jay and i saw them in gulf shores at the hangout fest in may 2010 and then this february at the tabernacle in atlanta and once again in april at the house of blues in new orleans...i was feeling a bit over the top and quite the groupie until the lady next to us in new orleans had seen them a ridiculous number of times; like i can't even remember how many;  so i felt a bit better. 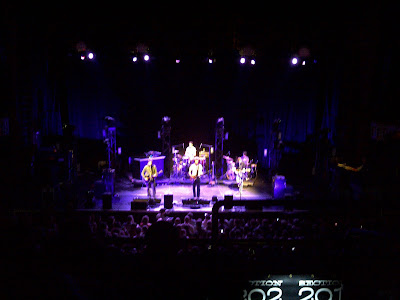 at the tabernacle in february
i wanted to sit in actual seats like the old lady i am but i kind of regretted it so in new orleans we were right in front like a teenager!
oh and to explain the post title a bit better, back in the spring the following was a nightly occurance for a while....hadley insisted on a bed full of "friends" to sleep with her but then she would call out 30 or so minutes after we shut the door announcing "there is too much stuff in here"!  well of course there is!  i tried to tell her that 30 minutes ago but she looked at me like i am from mars!  which maybe you all are starting to think the same...
Posted by smcfarland at 6:17 AM