limas and pancakes and fries...oh my!

just to name a few of audrey's recent new "big girl foods"... at 9 months hadley was eating steak but audrey doesn't have the teeth of her big sister and there is so much more going on at meal time with 2 that i kind of forget she doesn't have to eat gerber at every meal!

audrey turned 10 months old last thursday and i can't believe in less than 2 months we'll be turning around the car seat for our little bean! honestly, i know all moms say this but, where did it go? she is such a ham and has quite a temper too. she will not hesitate to let hadley know she is less than happy about the toy that was just ripped from her chubby hands. but mainly she just smiles and talks and sings and, now, dances which jay and i get a kick out of! she may not be able to express it in real words but the girl is LOUD; poor thing got that from her mother... tooth number 3 (top, left) has also made an appearance and number 4 is close behind. she still isn't crawling in the traditional sense but she has no trouble getting around and still LOVES to sleep!  like 12 hours at night, 2 1.5 to 2 hour naps during the day and she is getting closer to dropping the evening cat nap but most days still takes it and sometimes will sleep for another hour if she only got 1.5 hours that afternoon.

last thursday night we were all out playing in the back yard after dinner; well jay was loading up the car to head to rib it on friday but the rest of us were playing. the weather was unseasonably fabulous and i snapped several pictures of audrey (food stained onesie and all) and even a few of h would is the "no picture" child in the house. i guess audrey's love of the camera is another she got from me...better than the loud voice. anyway, there were some cute pictures but for some reason this is the one that captures my heart. 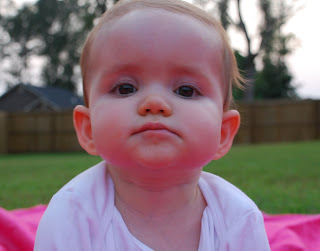 happy thursday to everyone! look back sunday for pictures from audrey's 1st and hadley's 2nd trip to jordan hare. i got the girls shirts back this afternoon from being monogrammed so everyone is ready to go except for jay who waits until the very last minute every year to get a new game day shirt.... then monday we head to the gulf for audrey's very first trip to the beach! can't wait...we all need some great relaxing family time. the weather is supposed to be great and even a little on the "cool" side for this time of year (and by that i mean highs around 90!). hadley is all about the beach trip and keeps talking about her bathing suit. she is also all about the "football game" and having her picture made with "war eagle". i told her aubie says war eagle so now instead of calling him aubie she just says war eagle. she also calls all cows "cebus" now...anyone who has the veggie tales "ultimate silly song countdown" knows what i am talking about and i am sure the rest of you would just look at her like she was crazy...which she is but just in other ways... "see" y'all again on sunday!

Posted by smcfarland at 1:36 PM