take me out to the ballgame!

last night the mcfarland girls experienced their first baseball game! they both had a good time and so did we! some friends of ours were nice enough to share their suite with us and i think that is the only way to do a baseball game; for now! hadley had a great time playing with "the boys"...most of our friends have boys only so she spends more play dates with boys than girls...and she was absolutely filthy when it was time to go home. now i must admit i saw VERY LITTLE of the actual game but the fellowship was nice and it was nice to take the girls to something different! the game from the night before had been cancelled due to rain and i think if it were not for the double header it would have been hard to get jay to leave before fireworks so thank the good lord we weren't out until after 10!

one funny thing was that hadley had an ABSOLUTE meltdown when we walked in...i mean she just broke down! "hold you" and all of that and was holding on to my neck for dear life and crying so hard that she was having trouble catching her breath; did i say this was funny?!? well it was to us! she was apparently scared of "bay bear" (the mascot) and his "loud" dance music! she is our "dance" child so we were totally thrown by this little charade. she was fine after he was out of sight...silly girl! 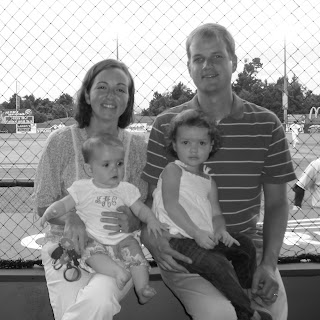 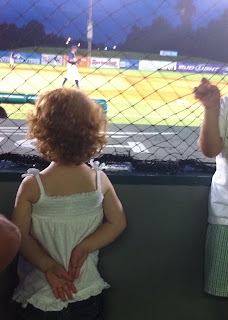 with mac and parker getting some peanuts from forrest 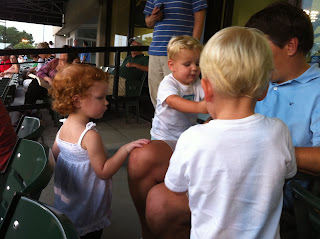 getting more peanuts from daddy!  did i mention she was ALL about the peanuts?!? 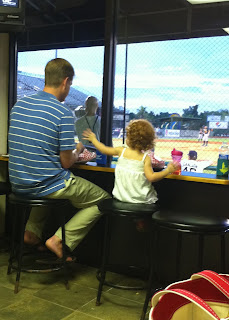 Posted by smcfarland at 6:53 AM