so i am told when justin and i were younger, much younger...like almost 30 years younger than we are today, that people often asked if we were twins. i always thought that must have been because we looked so much alike; we were certainly similar in size being only 16 months apart and since justin was a beast! but now, having two little ones of my own, i don't know what to make of it. 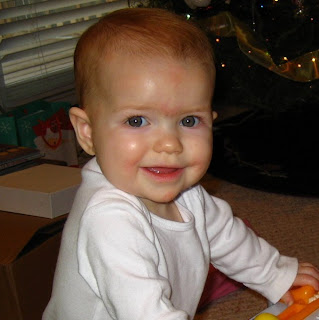 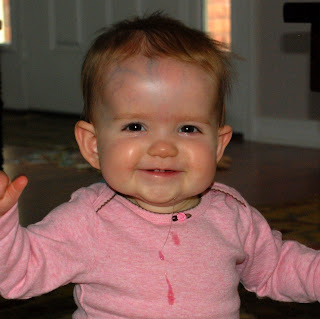 these are pictures of the girls taken at roughly 9 to 10 months old.  do they look alike to you?!?!?  it is almost a stretch, to me, to look at these pictures and tell they are even related!  is that because i am their mother and look at them all day, every day so i see every little difference?

though i will say i am starting to see that though hadley looks like her daddy she has her poor mother's white skin and though audrey looks like me she has her daddy's darker complexion.  in my opinion, a lovely mix of two parents who adore them!

ok...so i just looked at these pictures after i posted and realized it was kind of funny because it looks like audrey has this mouthful of teeth!  truth be told the poor child only has 2 and hadley looks like she has none but she had 8 at this point and was eating steak!

Posted by smcfarland at 1:18 PM